1. Know before you go

A. The difference between SoC edition and MCU edition of Gokit program

Since the SoC edition of Gokit program is developed directly on the Wi-Fi module, the concept of MCU is not explicitly involved. Thus no transmission via serial protocol is required, and no protocol encapsulation and decapsulation are needed to be implemented by developers. The focus is on the parsing of “p0 data area”.

B. The relationship between SoC edition and MCU edition of Gokit program

The p0 data area convention has the following clauses:

1) When the module sends a command to the MCU, the p0 command, command flag and the writable data area are carried.

2) The p0 command and the complete data area are carried when the MCU actively reports the status or replies the status query from the module.

3) The data area will automatically merge the Boolean and enumeration variables, and have a strict order, which cannot be changed arbitrarily.

How to understand the convention? Open the “XX - Serial communication protocol for Gizwits IoT Cloud access”, you will see the following commands:

2) The heartbeat of the Wi-Fi module and the device MCU;

3) The device MCU tells the Wi-Fi module to enter the configuration mode;

6) The Wi-Fi module requests to restart the MCU;

9) The device MCU actively reports the current status to the Wi-Fi module;

10) The Wi-Fi module controls the device;

(The rest items are not important and thus omitted)

Most of the basic communication protocol has been implemented by Gizwits, so just pay particular attention to the 8th, 9th, and 10th commands.

Note: For the SoC edition of Gokit program, you do not need to focus on the content of the protocol other than the p0 protocol.

2). The attr_vals(6B) is the writable data area as defined below:

It can be clearly seen here that the data value (Data Point) is valid only when the corresponding flag bit (attr_flags) is 1. It is necessary to pay special attention to the third clause of the p0 data area convention, that is, the data area will automatically merge Boolean and enumeration variables, and have a strict order, which cannot be changed arbitrarily. In the above example, “byte0” merges the “bool” and “enum” types.

It is necessary to note the third clause of the p0 data area convention. The data area will automatically merge the Boolean and enumeration variables, and have a strict order, which cannot be changed arbitrarily.

Above is the explanation of the p0 data area convention. Next, this document goes into details about the SoC program. After the protocol is parsed, the valid Data Points of the p0 data area generate the corresponding Data Point events, which are used to process the Data Points.

Description of the conversion of Data Point into event:

The valid Data Points are determined according to the attr_flags of the p0 data area, which are converted into the corresponding Data Point events, which then are processed in the event handler (gizEventProcess).

Description: The structure dataPoint_t is used to store the device status of the user area. After you assign a value to the corresponding data field according to the Data Point defined in the cloud, you do not need to care about the data conversion. The data field corresponds to dev_status(11B) of “4.9: The device MCU actively reports the current status to the Wi-Fi module” in the p0 data area convention.

The structures of attrFlags_t and attrVals_t correspond to attr_flags(1B) and attr_vals(6B) of “4.10 The Wi-Fi module controls the device” in the p0 data area convention respectively: 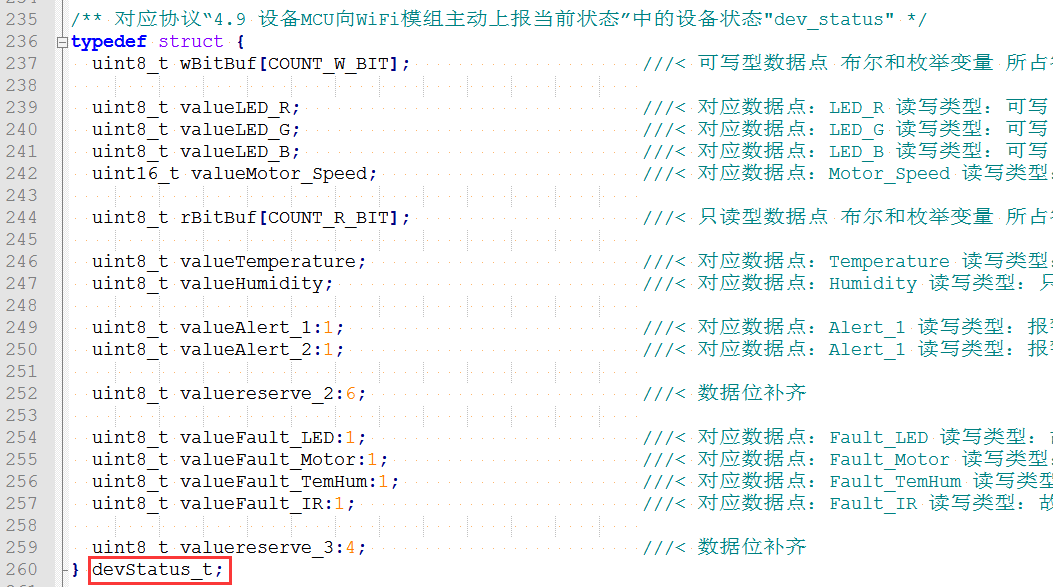 The structure devStatus_t corresponds to dev_status(11B) of “4.9 The device MCU actively reports the current status to the Wi-Fi module” in p0 data area convention:

dataPoint_t is the application layer data structure that developers need to understand. (For details, see: “2.7.1 Get read-only data” section).

B. Example of bit field:

Description: This function initializes the two major parts of the GAgent module and the Gizwits protocol module as the program entry. Developers’ main concern is the implementation of gizwitsInit() and userHandle(). 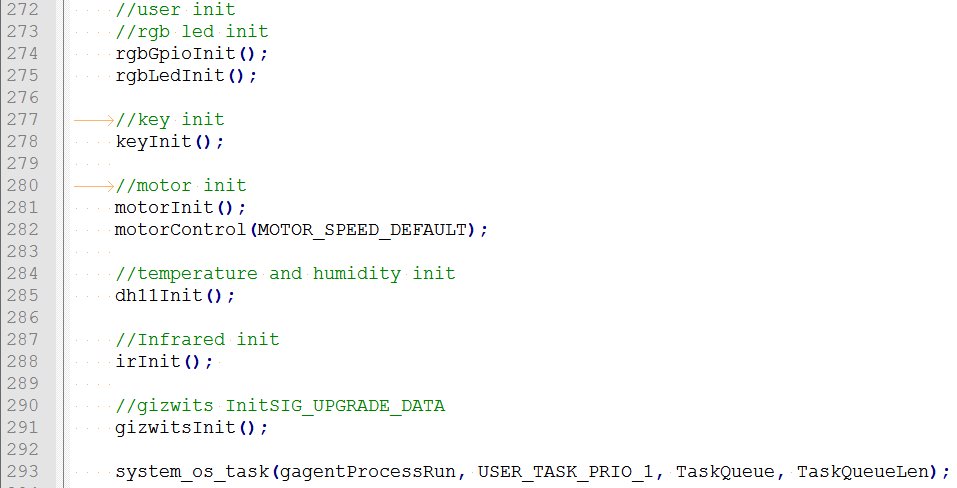 This part completes the hardware driver initialization of the RGB LED, motor, temperature and humidity and infrared sensor. The corresponding driver code is implemented in SoC_ESP8266_32M_source\app\driver.

The initialization of the timer is completed (see Sections 2.3.4 for details).

The initialization of the system task is completed (see Sections 2.3.5 for details).

In the userTimerFunc(), the periodic execution of the cycle of 100ms is completed. You can periodically read the peripheral data in the user_handle(), and assign the read data to the global structure variable of the user area: 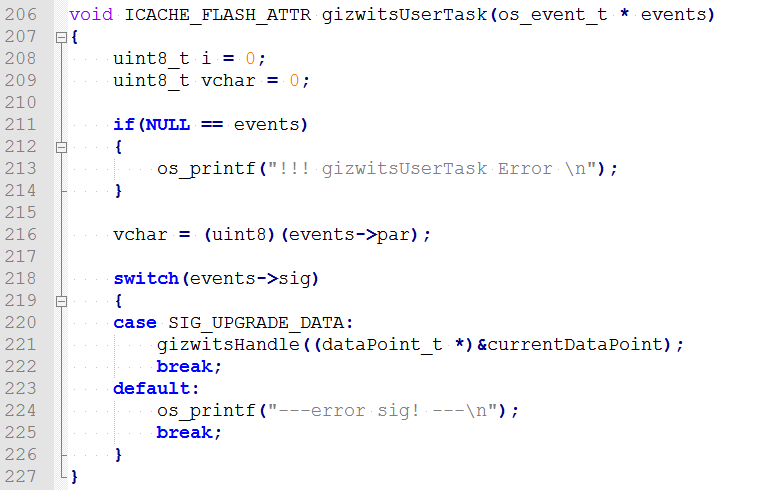 You can customize the system tasks (the message types in system_os_post), and then add the corresponding task handlers (i.e. the corresponding message types in the switch statement) in the system task callback function (gizwitsUserTask).
It should be noted that the task priority cannot be modified at will (there are three priorities, and the priority 0 is reserved for developers):

Devices need to enter the configuration mode to access Internet and communicate with the cloud by calling the Wi-Fi configuration API.

In this example project, the corresponding configuration modes are triggered by a button. The interface call location in the program:
SoC_ESP8266_32M_source\app\user\main.c

A. Enter SoftAP mode: short press on the key2.

B. Enter AirLink mode: long press on the key2.

Note: You can implement the configuration mode according to your own needs.

This function is called by the GAgent module to process the relevant p0 protocol data from the cloud or App.

The following is a detailed description of the protocol handler:

The protocol format corresponds to the command flag “attr_flags” + data value “attr_vals” of the “p0 protocol area” for the command “4.10 The Wi-Fi module controls the device”.

Since the SoC edition has removed the concept of the serial port protocol compared with the MCU edtion, you only need to understand the 8th and 10th commands in the “ XX - Serial communication protocol for Gizwits IoT Cloud access”:

10) The Wi-Fi module reads the current state of the device;

The “action” value is “0x02”, and the corresponding case statement in the program is “ACTION_READ_DEV_STATUS”.

After that, the data type conversion of data reporting is completed (the converted data is stored in the devStatus data bit of gizwitsReport_t):

Finally, the data to be reported is output by copying a memory pointer:

So far we have gone through the detailed explanation of the p0 protocol processing functions.

The function calls related with the control-type protocol are as follows: 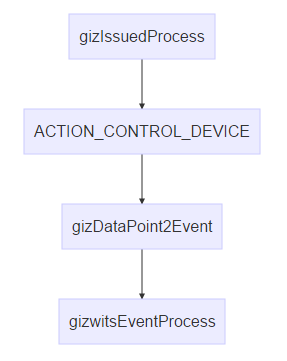 Complete event generation for writable peripherals. Take the LED On/Off as an example:

Here corresponds to the command “4.10 The Wi-Fi module controls the device”:

You have already known that the “issuedData->attr_flags” in the program corresponds to attr_flags(1B) of “4.10 The Wi-Fi module controls the device” in WeChat Pet House - Serial communication protocol for Gizwits IoT Cloud access.pdf, in which we can see that the 0th bit of attr_flags is used to control LED switch, that is, as long as the 0th bit is set to 1, it means to switch the LED on or off, the corresponding code snippet is:

The next step is the generation of control-type event:

Note: Enumerations (such as EVENT_LED_ONOFF) are used to indicate the meaning of the event intuitively, which can be added and modified by yourself. (Location: SoC_ESP8266_32M_source\app\Gizwits\gizwits_protocol.h)

This code snippet is used to control the LED switch: If the value of the LED switch control bit “issued->attr_vals.led_onoff” is LED_On (0x01), it indicates that the light is turned on. This corresponds to attr_vals(6B) of the “4.10 The Wi-Fi module controls the device” in WeChat Pet House - Serial communication protocol for Gizwits IoT Cloud access.pdf, which is the “data bit” as follows:

The 0th bit is used to switch the LED on or off, and the corresponding Data Point defined in the cloud means:

The following code snippet is basically the same as above. As long as you understand the attr_flags(1B) and attr_vals(6B) of “4.10 The Wi-Fi module controls the device” in XX - Serial communication protocol for Gizwits IoT Cloud access.pdf, you can programming for the control-type protocol.

After receiving the data that was specially processed from the cloud, it needs to be converted in gizDataPoint2Event.

The Data Points for the uint16, uint32 type data should consider using the network byte order conversion (using the exchangeBytes() function for uint16). Take the motor control as an example:

The function calls related to the reporting-type protocol are as follows: 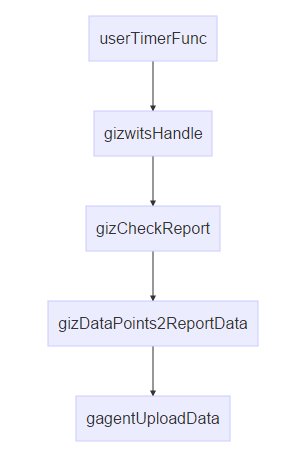 This function completes the acquisition of the reporting-type data of the user area. The user only needs to assign the read data to the current device status structure of the user area:

For whether to report the current status according to the protocol, there are two determination logics as follows:

Logic 1. If it is a control-type data change, immediately reports the current status.

Logic 2. If it is a user triggered or environmental change, the time interval of reporting should be at least 6 seconds.

The relevant rules in the protocol are as follows: (“4.9 the device MCU actively reports the current status to the Wi-Fi module”)

After getting the original data of the user area, the corresponding conversion is performed on the data before being transmitted to the cloud by using gizDataPoints2ReportData.

In order to make the device function definition simpler and more straightforward, the user input value is converted into a uint type that the device can recognize. The core formula of the algorithm is: y=kx+m (y: display value; x: transmission value; k: ratio; m: offset)

Take the temperature Data Point of WeChat Pet House project as an example:

The ratio and offset are defined as macros in SoC_ESP8266_32M_source\app\Gizwits\gizwits_product.h

Description of the conversion functions in the program:

Take the RGB LED of WeChat Pet House project as an example. The Data Points are defined in the cloud as follows:

The corresponding data format in the document is as follows:

The corresponding macros of the Data Point byte order and bit order are defined as follows:

The Data Points are decompressed as follows when received (located in the gizDataPoint2Event function):

The Data Points are compressed as follows when transmitted (located in the gizDataPoints2ReportData function): 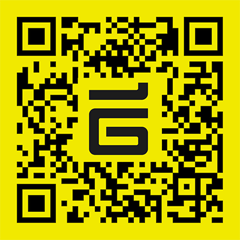