1. What is Gizwits ECE fog computing?

The Gizwits fog computing can be thought of as the computing on the device side, which empowers the cloud to meet some data process requirements that cannot be satisfied in the cloud. For example, a device is required to collect sensor data 50 times per second. It is impossible to transmit the data to the cloud in real time and then process it. Instead, it is more suitable for the device to perform necessary data process, transmit the processing result to the cloud, or directly convert the analysis result of the data into an action, which thereby improves the real-time performance.

ECE is the abbreviation of Edge Computing Engine, which means the edge computing engine.

PK is the abbreviation of Product Key, which is the unique number of a product created in the Gizwits Developer Center. Each type of products shares the same Product Key.

A protocol script performs the conversion between the product custom protocol and the Gizwits protocol to facilitate devices to access Gizwits IoT Cloud easily.

Lua is an embedded scripting language that is configurable and extensible.

Gizwits ECE fog computing serves enterprise developers, while it is not open to individual developers.

Set the communication interface’s parameters, such as serial port number, baud rate, data packet format, and verification type in order for the module and device to send and receive data normally.

Convert the original serial port number of a device from COM3 to COM4 through Lua script, and convert the baud rate from 9600 to 38400.

Go to the ECE fog computing service. In the [Communication Configuration], type the prepared script (as shown below, the device serial port number is converted from COM3 to COM4, the baud rate is converted from 9600 to 38400), and click [Push] , then set the push address. At this point, we can see that when the program starts up (as shown below), the serial port number opened is COM3, and the baud rate is 9600. Then receive the message push from the cloud during the run. After receiving the message, the module will restart the serial port and open COM4 according to the set parameters, and its baud rate is 38400. 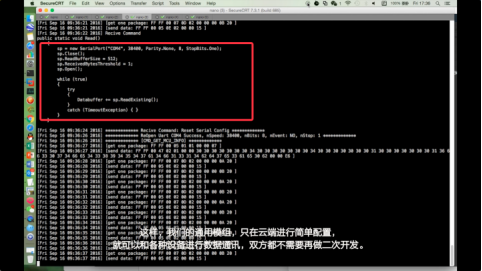 In this way, Gizwits general-purpose modules can perform data communication with various devices only by simple configuration in the cloud, and neither side needs to do secondary development. 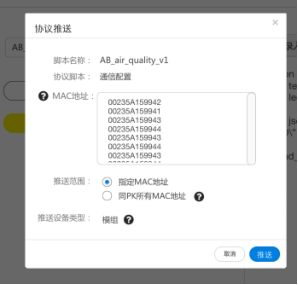 Mini Application refers to the format conversion of data acquired by the device, the behaviors of the device (e.g., setting the frequency at which the device collects the temperature) and the post-processing of the data (e.g., calculating the maximum, minimum, and average values of the temperature).

Convert the raw binary data collected by the device into a JSON string and then report it to the cloud.

Go to the ECE fog computing service. In the [Mini Application], type the protocol conversion script (as shown below), and then click [Push] to set the push address. 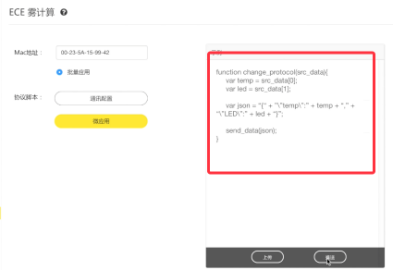 You can see that the original binary data is output at first (as shown in the figure below). After receiving the script sent by the cloud, the module outputs the formatted JSON string. 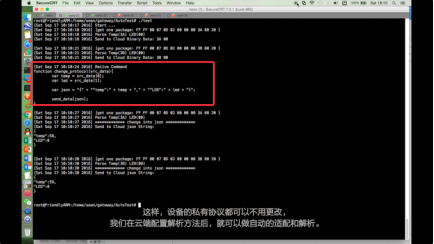 In this way, you can continue using the device’s proprietary protocol without modification. After the interpreting method is configured in the cloud, it can perform automatic adaptation and interpretation.

When the temperature exceeds 70 degrees, turn on the red light to report an alarm.

Go to the ECE fog computing service. In the [Mini Application], type the action script (as shown below), and then click [Push] to set the push address. 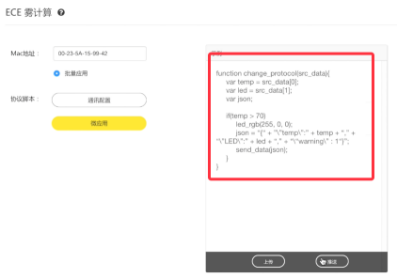 From the log (as shown below), you can see that the module has received the script. At this point, we use a heat gun to heat the sensor (as shown below), you can see that after the temperature is more than 70 degrees, the device turn on the red light. 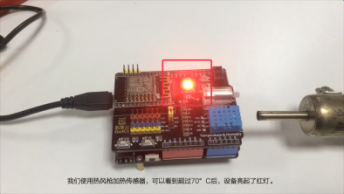 In this way, more features of the device can be easily added or changed later, without upgrading the firmware.

Let the device perform more efficient and complex data calculation, and convert the calculation result into JSON format and upload it to the cloud.

In both cases, the data is reported once every 5 seconds, but the latter is more data-worthy.

Go to the ECE fog computing service. In the [Mini Application], type the script of device behavior settings and data analysis (as shown below), and then click [Push] to set the push address. 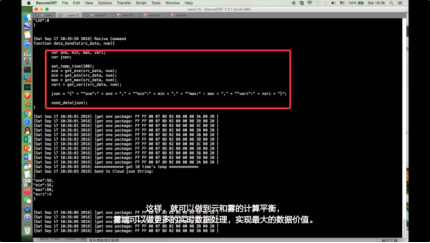 In this way, the balance of cloud computing and fog computing can be achieved, and the fog end can do more real-time data processing to yield maximum data value. 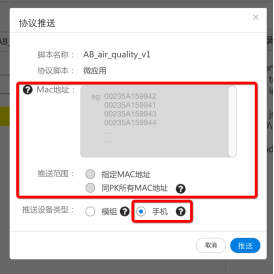 The script name is required and user-defined, which can be up to 64 characters: [A-Z], [a-z], underscore (_), [0-9], and cannot start with a number. The script is unable to be push without a name that is used to:

Currently, only the latest version is saved for the script.

You can input at least one MAC address, and up to 50. Also, note that you can only have one entry on each line for each MAC address. When the scroll bar is shown on the right, it allows you to scroll up and down to go through all MAC entries, which will be saved after push. The script template for Communication Configuration is as follows.

The script template for Mini Application is split into several modules, each of which has a specific module template, where the corresponding module implementation should be added below the “–to do”. The following Mini Application modules are currently supported:

The script template for initialization module is as follows:

Description: Initialize the Lua environment, such as the application memory size.

The script template for common functions module is as follows:

The script template for App data handling module is as follows:

The script template for device data handling module is as follows:

Description: Process the business data sent by the device.

1. Which wireless communication protocols does the ECE service support?

Push history is currently not supported. Each time the script upload or script push saves only the latest script. Push history will be available in the future.

3. Can the Lua script template be customized?

No, the script template is fixed and used to identify which script type it belongs to.

4. What should I do if the MAC address input is incorrect?

After you click Push button, the cloud will check the MAC addresses. If the MAC address input is incorrect, a pop-up window will prompt you. You only needs to go back to the push configuration page, where the wrong MAC addresses are highlighted in red font, and delete or update them.

5. Will the module or mobile phone provide feedback when it receives the Lua script successfully?

Currently the module or mobile phone cannot provide the feedback on whether it receives the Lua script successfully, while only gives feedback to the user on whether the push is successful.

6. Does it support the script file upload?

No, it does not support script file upload currently, which will be available in the future.